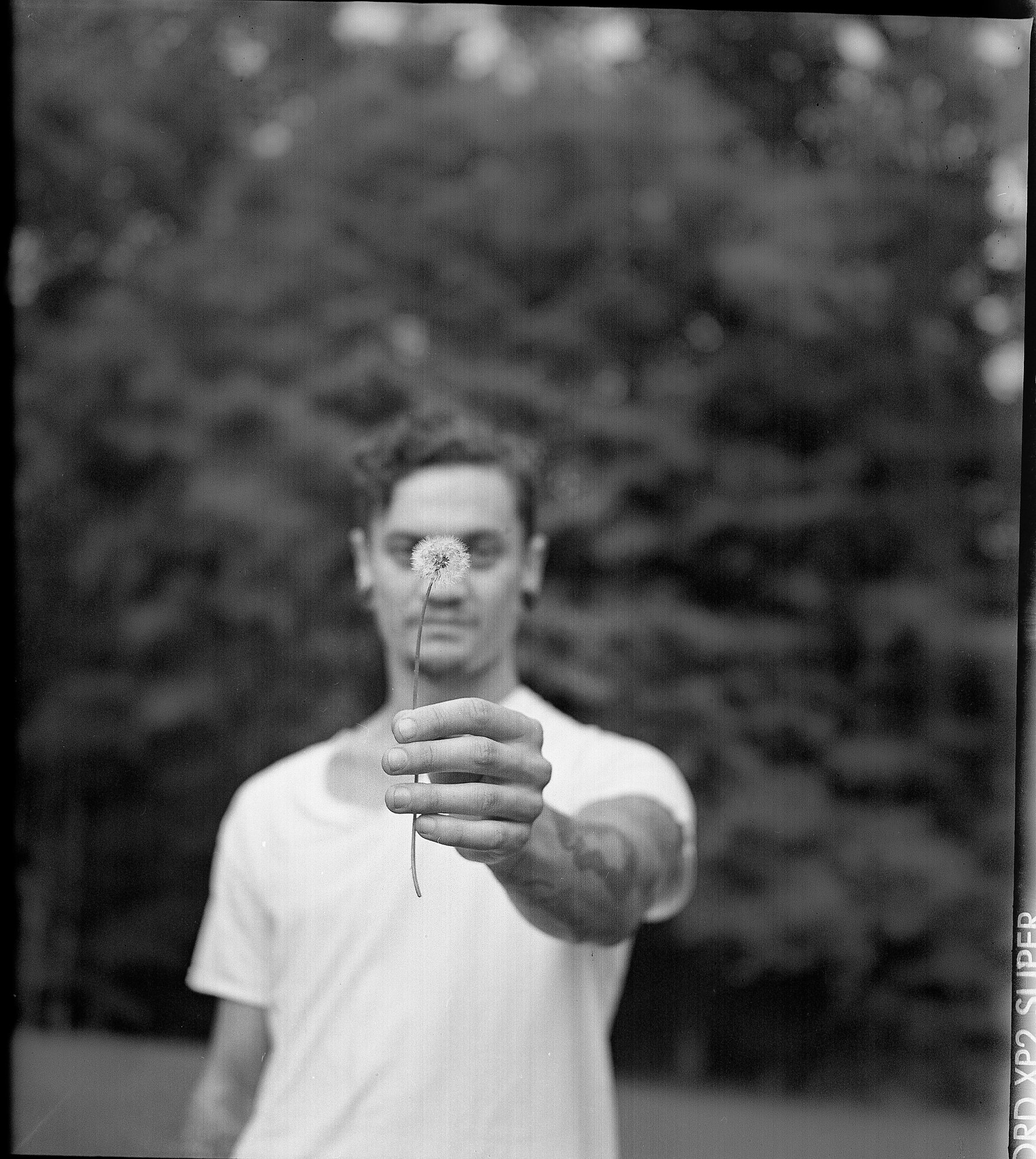 The other night whilst camping in South Dakota I wandered over to an adjacent campground and started random chit chat with a fella named Eric.  He and his wife were on a little road trip from their home in  Wisconsin to Yellowstone for the eclipse.  He hunts, fishes, drinks beer, loves guns, and is a major Trump supporter.  We sat and chatted over beer and cigars and shared travel stories by the fire while the rest of the campground hummed silently with the slumber of fellow campers.  After about 45 minutes and two 10% beers I stumbled somewhat drunkenly back to my tent, slipped inside, bundled up in my sleeping bag and nodded off.

The next morning I sleepily opened my eyes and emerged to a still silent campground.  The sun was just beginning to peek over the tops of the ancient formations that form the badlands.  I wandered about a quarter mile down the road to a nearby gas station for a pack of smokes and on my way back encountered a young woman sitting on the side of the road admiring the dawn of this new day.  As fellow travelers we broke the serenity and exchanged the first words of the day.  By the time I returned to the campground the patrons were beginning to emerge from their tents.  The vast silence of the early morning replaced by the faint and distant sounds of voices accompanied by the clinking and clanking of pots and pans.  My gaze drifted over to Eric's camp site as he and his wife prepared breakfast.  As he caught sight of me he raised his hand into the air and called out across the way.

So I mosied over and as I approached the smell of sausage and eggs tickled my nostrils.  My mouth began to water as he handed me a cup of coffee and a paper plate with, you guessed it, sausage and eggs.  As we ate he and his wife Emily told me how they had just celebrated their one year anniversary.  They were entirely kind and generous people and it began to make me think.  We're so divided by our political and ideological affiliations and beliefs, and yet here I was with two people who think quite differently from me and yet we can get along just fine.  Like having breakfast with the minotaur, the monster you've built up to be so terrible in your head, and finding that not only is the minotaur a super nice guy but you actually both have a lot in common, despite your differences.

My mind drifted back to the day before when I rolled into the town of Interior, South Dakota (population 67) and pulled up to the only place in town to eat: The Horseshoe Bar.  Situated in a strange corner lot, the double wide trailer sits in an unkempt grass lawn with various auto parts strewn about and resembles the residence of a hoarder more so than a place to eat.  As I stepped through the door the first thing I noticed was that it was dark, and as my eyes adjusted to the low lighting the seediest environment came into view.  Half stuffed animal carcasses hung from parts of the ceiling, dollar pills were stapled to every compressed wood surface in the place, and the owner, a short, squat, troll of a man stood huddled over the bar, making what I can only describe as animal sounds while using his hands to stuff his face full of greasy meat.  I mean really horking it down.

With his mouth full of flesh and a voice full of gravel he grumbled, "What are you lookin for, a drink?  Some food?"

"A little of both," I replied warily.

"You want a burger and some whiskey?"

He grabbed his cane and hobbled over to the bar to grab a bottle of Jim Beam (that's all he had) and poured it into a glass before sliding it over to me.  From their he continued to hobble back to the kitchen and just before he disappeared through the doorway he stopped, took one sultry look at me over his shoulder, and not so subtly turned the security camera to face me directly.  And with that he was gone.  While I waited I observed a giant flat screen TV in the corner that seemed oddly out of place in this specific environment.  Fox news was blaring on the screen talking, of course, about Donald Trump.  What seemed like a miniature eternity had passed when the troll emerged from his cave and threw a microwaved cheeseburger down on the bar in front of me and without missing a beat began to grumble.

"You know, these fuckin Anti-Trumpers are out of control.  Look at what happened during that Nazi rally.  They were just expressing their views and exercising their rights as American citizens and those pansy ass city pussies came and told them they weren't allowed to.  And of course they got their asses kicked.  This is America."

I warily took a bite of my microwave meal as I sat with my legs crossed, very apparently a "pansy as city pussy."

The grumbling continued, "I'm tellin' ya, there's gonna be a fuckin' battle and those anti-Trump pussies are gonna lose.  We shoot guns and hunt and kill things as a way of life and what do those liberals do?  Sit around and write about their fuckin' feelings."

At this point I'm reconsidering the bites of burger I've already taken and wondering if I can retroactively un-eat them.  Here I was eating food served to me by a man who was talking about killing liberals, but I was already half way through so fuck it, right?  Luckily his revenge only went as far as serving me a halfassed nuked burger (I know this because the next patrons that came in ordered burgers and he said "well let me go outside and fire up the grill!"  Dick).

Now let's journey back to the next morning.  Me, a clearly liberal city boy, sitting with Eric and Emily, clearly conservative country people, enjoying a wonderful breakfast together.  Consider the contrast.  The condemning views of the troll in the bar need not apply.  There was no separation, no us or them, just the collective we.

Perhaps it's not our political views or ideologies that cause the rift between us but our misunderstandings of one another and the fatalistic assumptions of what that means.  The answer is not to get everyone on the same page, there are far too many of us on this rock for that to be even remotely possible.  Maybe instead it's our duty to reach out to each other, especially those who stand opposite us.  Rather than trying to convince others to see things through the same lens perhaps we should learn about and empathize with one another's respective journeys and how we got to where we are.  In doing so we might be able to live harmoniously and recognize that we all ultimately want the same things and can stand united on the issues that really matter and affect all of us.  Maybe we can learn to accept the plurality of human existence.